TravellerSpace, in partnership with Cornwall Council invite you to a special screening of the Porrajmos – the Untold Story of the Gypsy Holocaust at Falmouth Cinema, (moved from Redruth Cinema), 12th June 11.30 am. Places are limited, so book your place as soon as possible. 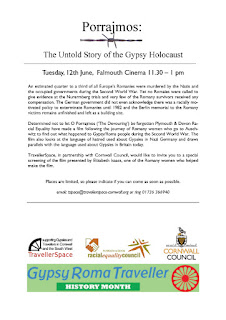 An estimated quarter to a third of all Europe’s Romanies were murdered by the Nazis and the occupied governments during the Second World War. Yet no Romaies were called to give evidence at the Nurermberg trials and very few of the Romany survivors received any compensation. The German government did not even acknowledge there was a racially motivated policy to exterminate Romanies until 1982 and the Berlin memorial to the Romany victims remains unfinished and left as a building site.

Determined not to let O Porrajmos (‘The Devouring’) be forgotten Plymouth & Devon Racial Equality have made a film following the journey of Romany women who go to Auschwitz to find out what happened to Gypsy/Roma people during the Second World War. The film also looks at the language of hatred used about Gypsies in Nazi Germany and draws parallels with the language used about Gypsies in Britain today.