Illegal Haldon Travellers site could be made permanent 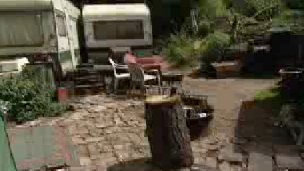 Between 30 and 50 Travellers, many of whom have children at local schools, have lived on the site in Haldon Forest, near Exeter, since 2002.

Teignbridge District Council will decide later whether to support a planning application from Teign Housing to create 15 permanent pitches.

Teign Housing has secured more than £1m from the government’s Homes and Community Agency (HCA).

The HCA funding includes £125,581 which could be used for clearing the current site and the transfer of the land from Devon County Council to Teignbridge District Council.

A permanent site would have 15 hard-standing pitches and amenities such as electricity, water, showers and toilets.

Anyone living there would have to pay a fee, which would include a service charge to Teign Housing, and the pitches would also be subject to council tax.

“The council feels that smaller sites generally work better than larger ones,” she told BBC News.

“But if people want to stay and there are not enough pitches, we hope Teignbridge council will continue to look for other solutions.”

Ms Dane said the Haldon Travellers, like any other diverse group, may have differing opinions over what those solutions could be, adding that it was important to remember that consultations between the travellers and the authorities were still ongoing.